Born July 21, 1969 in Sevelen (Rhineland), raised in Rheinberg. Parents Heinrich and Brigitte Werth, one older sister, Claudia. School from 1976 to 1989. A-Levels exam at Amplonius-Gymnasium Rheinberg. Began studying law late in 1989, bar exam in 2000. Worked as a lawyer at Oexmann in Hamm, then from late 2001 until early 2004 as sponsoring coordinator at Karstadt Warenhaus AG. In 2004 Isabell set up her own dressage stable in Rheinberg/Niederrhein. 2009 birth of her son Frederik. Competes for her local riding club, „Graf von Schmettow Eversael“, to this day.

With Passion, Patience and Humility

Growing up on her parents’ farm, she was surrounded by horses from day one. As a five-year-old, Isabell, circled the arena on her pony mare Illa, a little later she won her first ribbons with Funny – in proper beige breeches and a dark jumper; the black competition jacket would follow later.  Nobody would have guessed that the jacket would some day be replaced by a tailcoat.

Isabell was a passionate showjumper and eventer — until “der Doktor” took her under his wings. On New Year’s Eve in 1986 – Isabell was just 17 –  her family’s neighbor Dr. Schulten-Baumer sen., a steel manager and renowned dressage expert, asked her whether she would like to ride some of his horses.

Isabell, who was friends with his youngest daughter Verena, agreed eagerly. This was the beginning of a coach and rider relationship that was to become one of a kind. Isabell celebrated triumphant victories with all of the Doktor’s horses, but she owed her best moments to Gigolo, the chestnut gelding who became a legend thanks to her – and she to him.
“Apart from my parents, it was the Doktor who was my biggest influence in the beginning”, Isabell looks back gratefully. “And the fact that I was able to ride such an uncomplicated and willing horse as Gigolo to start with was an invaluable gift.”

Isabell and her mentor worked together for fourteen years. When not riding, Isabell went to school (“my favourite subjects were sports and religion …”), completed her A-Levels (“my average score of 3.1 was maybe not so good, but I guess I was busier riding than studying at the time …”) and went to university. Once again she proved that it doesn’t only take talent and luck to be successful but also discipline, diligence and stamina – in sports as well as professional life.

Despite a busy schedule, despite her daily dressage training and her trips to competitions all over the world, Isabell acquired her law degree. In 2000 she passed her bar exam and then worked as a lawyer for a year before taking up a job at the marketing department of her new sponsor Karstadt. At the same time, she also chose a new career path in sports.

In 2001 she parted ways with her mentor Dr. Schulten-Baumer: “The time had come for me to become more independent.” She moved to Mellendorf (near Hannover) to spend some time at her friend and sponsor Madeleine Winter-Schulze’s stable, where she stayed for two years. In 2004, she decided to go independent and establish a training facility with 22 stalls at home in Rheinberg, finally making riding her profession.

„I’ve been lucky to meet the right person at the right time not only once, but twice in my life“, says Isabell. „It was the Doktor who helped me to get to the very top. Madeleine Winter-Schulze then enabled – and still enables – me to stay there. 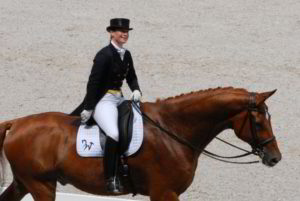 Thanks to her I enjoy the independence to take my time to train and shape my horses, to let their rhythm guide me.“

In the mean time, Gigolo’s legendary era in dressage had come to an end. Isabells rising star Amaretto died of a colic – a major setback for Isabell’s dreams. Of course she remained a presence with Anthony FRH and other horses, but she lost her top position for a while.

Satchmo and Warum nicht FRH were the two horses that finally paved the way for her again, at the same time underlining her unique talent as a rider: Warum nicht, nicknamed „Hannes“, was a giant with a very timid heart, and his anatomy didn’t exactly yell „dressage athlete“. But that’s exactly what Isabell shaped the Weltmeyer-offspring into, because she really believed in him.

It was Hannes who was supposed to be her horse at the WEG on home turf in Aachen 2006, but he injured himself a few days before the championship, clearing the way for his stable-mate Satchmo. „This horse has taught me humility“, Isabell says even today about the elastic bay, who on good days was suppleness incarnate – and could switch into mutiny mode in a heartbeat when the mood struck him.

Team and Individual Gold as well as Freestyle Bronze at the World Championship in Aachen were followed by a setback at the Beijing/Hongkong Olympics, where Satchmo suddenly went of the rail in the middle of a brilliant freestyle test. 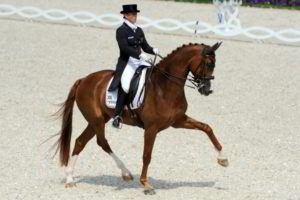 Even the silver medal they won anyway couldn’t hide the fact that Satchmo had a problem – but Isabell stubbornly fought for him until an eye specialist finally found the solution.

Team Bronze with Hannes at the WEG in Kentucky 2010, European Team Gold with El Santo NRW in Rotterdam 2011, WEG Team Gold with Bella Rose in Normandy 2014, European Team Gold with Don Johnson in Aachen 2015, Team Gold and Individual Silver with Weihegold OLD in Rio de Janeiro 2016, Stuttgart German Master 2016 with Emilio – the past years have been an impressive demonstration of Isabell’s skill to get a feeling for completely different horses and to aid them to the very top.

With horses like the grey stallion Belantis (born 2009) or the black mare Superb (born 2012), Isabells journey will continue. Because, all ambitions notwithstanding: „Discovering and training young horses, that is my passion“, says Isabell Werth, and she still looks forward to the future every single day.